A Ray of Truth: Protecting Skin from Melanoma in Cold Climates

Even in winter and cold climates, you need to protect your skin from the sun’s ultraviolet rays which can lead to cancer.
BY Katie Kosko
PUBLISHED December 09, 2016 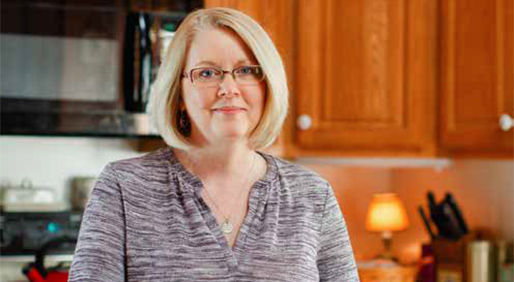 CELINA McHUGH , PATIENT - PHOTO BY MARIA DeFORREST
Growing up along the Delaware Bay, Celina McHugh spent a lot of her time outdoors. Never did she think that, at 37 years old, she would be diagnosed with stage 1 melanoma. But that became her new reality when her doctor found a lesion on her shin. McHugh underwent surgery — a wide resection — and was followed every six months for about eight years with skin exams, chest X-rays and labs.

“When I was a kid, there was no sunscreen. It was basically suntan lotion,” says McHugh. While sunscreen did exist in America in the 1970s, there was little public awareness about its importance. “When I was a teenager, they came out with the Hawaiian Tropic oil, which is what I used,” she continues. “I grew up in Lewes (Delaware). I went to the beach a lot. I can’t tell you how many blistering sunburns I had. I mean, it takes one blistering sunburn (in childhood or adolescence) to increase your chances of melanoma by 50 percent — and I had several.”

Sunscreen is now something she wears every single day, 12 months of the year. It’s a strategy every person should add to their routine, she says, and dermatologists agree.

“I think there is a bit of a myth that sunscreen is only important when we go to the beach or take a tropical vacation in the winter,” says Jason Givan, M.D., a spokesperson for The Skin Cancer Foundation. “Really, you should be thinking about sunscreen on a daily basis.”

The sun gives off ultraviolet A (UVA) and ultraviolet B (UVB) rays all of the time. UVA is a longer-wave ray of light than UVB. It can be harmful because, unlike UVB, people often don’t realize they are being exposed to it. For instance, it can pass through clouds, rain and even windows of homes and cars. People won’t see a burn or tan with UVA, like they do from UVB, which is more prominent in the summer months.

The closer a person gets to the equator, the more direct and more intense the sun they receive. People who live in countries close to the equator often don’t see a lot of seasonal variation, and therefore may have more exposure, too.

Population studies and statistics show that 90 percent of all skin cancers are caused by overexposure to UV radiation.

“A major thing to remember is that, although we don’t have the levels of UVB in winter that we do in the summer, UVA is almost exactly the same, and so without the signals of either a burn or a tan developing, one isn’t really aware of the UVA, and that’s pretty constant,” adds Amy Newburger, M.D., a member of the American Academy of Dermatology. The face, ears and neck are the parts of the body most at risk during winter months, but skin cancer experts say the eyes, lips, hands and head also need protection in colder climates.

Much like a body of water in the summer, snow and ice are reflective. Snow reflects up to 80 percent of the sun’s UV light, so the rays hit you twice, further increasing your risk of skin cancer. This means that people who enjoy winter activities such as skiing, snowboarding and ice skating should take precautions. Further, the higher you are in altitude — for instance, on a mountain — the more exposure you will receive.

Newburger also notes that people often think they aren’t getting too much sun because they don’t feel hot due to colder temperatures in winter months. That, she says, is a misconception.

Those who are most at risk of developing skin cancer, both in summer and winter, are people who work outside, are naturally fair-skinned, have previously had skin cancer and/or have a family history of the disease.

There are several tactics that can be easily applied in winter to help reduce a person’s risk. These include: wearing a broad-spectrum sunscreen with an SPF of 15 or higher every day; staying in the shade, especially between the hours of 10 a.m. and 4 p.m.; and covering skin that would otherwise be exposed with tightly woven clothing, wide-brimmed hats, scarves, gloves and UV-blocking sunglasses. Givan adds that thick denim, synthetic clothing and apparel in darker colors add a layer of protection. Newburger suggests opaque lipstick for women and lip sunscreens for men.

Skiers and snowboarders may want to consider wearing ski masks and goggles for greater protection, and covering their ears, as well. The larger the frames, the better protection to the sensitive skin around the eyes.

“After my first diagnosis, I was really careful and wore sunscreen every day on my face and my arms, even if I was just going in to work or to the store,” says McHugh. “I probably got less serious about it as the years progressed.”

She relapsed 13 years after her initial diagnosis — this time with metastatic melanoma. Her oncologist found a tumor in her groin, which was removed through a radical lymph node dissection. Another tumor was found in her back. With stage 4 melanoma, McHugh entered a clinical trial testing a combination of the immunotherapies Yervoy (ipilimumab)and Opdivo (nivolumab). While the drugs came with severe side effects, she says they worked.

“After my relapse, I now have sunscreen on my face, an SPF 25 at least, all year long,” she adds. “I also wear a hand cream that has an SPF 25. It might be 20 degrees outside, but you still need sunscreen.”

People can also reduce their risk of skin cancer by staying out of tanning beds. Often, people will try to get a “base tan” before leaving for a warm winter vacation or to keep a tan year-round, but each visit to an indoor tanning bed can increase the chances of getting melanoma, as well as non-melanoma skin cancers. Studies have found a nearly 60 percent increase in the risk of melanoma in people who have been exposed to UV radiation from indoor tanning. Tanning booths emit primarily UVA radiation.

The Skin Cancer Foundation recommends examining your own skin head-to-toe every month and seeing a physician once a year to have a professional skin exam done. Those people who have a family history of melanoma or who may have had several blistering sunburns in their lifetimes may want to go more frequently.

Newburger says people should watch out for a changing mole or a pimple that doesn’t heal, and persists and bleeds. They should also follow the ABCDE rules for recognizing a suspicious mole, which can be found on both the Skin Cancer Foundation and American Academy of Dermatology websites. The rules encourage people to consider suspicious any moles that are asymmetrical, have irregular borders, are not uniform in color, have a diameter greater than 6 mm and/or are evolving in size, shape or color.

Additionally, there are areas that a person can’t see themselves, like the scalp and back. This is where it can come in handy to have a friend or spouse take a look.

“You have to look out for yourself and, if there is something that makes you uncomfortable, make sure that it is biopsied, because I have seen a lot of doctors who say, ‘Oh, we’ll just watch it,’ and it turns out to be positive,” says McHugh. “I’d rather have a scar than have something I looked at for years and say, ‘Darn, I should have had it biopsied.’ ”

McHugh understands firsthand how a melanoma diagnosis can change your life. Her immunotherapy treatment and the steroids she was given left her extremely fatigued, with muscle pain and weakness in her arms and legs. She also was unable to work for a period of time. While she is now back to work, putting in half days, she still gets shortness of breath and has inflammatory arthritis.

As of January 2016, her scans were clear, and she has been classified as having no evidence of disease for 11 months. She has taken on two goals: to spread melanoma awareness and to grow old.

“It only takes one cell to become metastatic anytime later, and it’s there, it’s dormant in your body,” McHugh explains. “It’s one of those cancers where they don’t say ‘remission.’ They just say ‘no evidence of disease.’ It’s a waiting game. I know that mine will never be gone. I just have to keep waiting and see what my scans show.”
Be the first to discuss this article on CURE's forum. >>
Talk about this article with other patients, caregivers, and advocates in the Skin Cancer CURE discussion group.