Let the Pain Wash Over: Surviving Natural and Personal Disasters

A disaster psychologist sees parallels between surviving Hurricane Katrina and surviving stage 4 colon cancer.
BY Katie Kosko
PUBLISHED May 16, 2019
In August 2005, Hurricane Katrina devastated thousands of people along the Gulf Coast. Jamie Aten, Ph.D., a disaster psychologist, had moved with his wife and young daughter to south Mississippi just six days prior. Although their world was shaken, they survived that natural disaster.

Then, eight years later, in July 2013, he received a stage 4 colon cancer diagnosis. Aten used his experience from Katrina and other tragic events, such as the Tuscaloosa, Alabama, tornadoes, the Deepwater Horizon oil spill and the Haiti earthquake, to see him through. In an interview with Heal®, Aten shares the lessons learned, which he has chronicled in his new book, A Walking Disaster: What Surviving Katrina and Cancer Taught Me About Faith and Resilience.

Heal®: Can you provide a brief overview of what readers can expect from A Walking Disaster?
Aten: I share my story of going through stage 4 colon cancer, which was a yearlong battle of treatments. I draw from my experience before this as a Hurricane Katrina survivor. I share experiences from that and then the parallels of going through a mass disaster and then a personal disaster. I share not only my experience but also those of people I’ve helped and learned from, as well as the research that I’ve been doing in this area for 14 years.

What was the lesson you learned from surviving Hurricane Katrina and colon cancer?
By holding on to hope and faith, I was able to find meaning. In many ways, going through cancer helped me understand some nuances and some differences that I don’t think I would have learned just from studying other disaster survivors — one of those being that since going through cancer, I am grateful that I am currently almost five years with no evidence of disease. One thing I didn’t understand, for instance, was that when Katrina went over my community, it went over in less than an hour, but with cancer, that situation was hovering over me directly for over a year and in some ways still hovers over me, with the thought of “What if this comes back?” I realized not just that I needed to go back to the way life was before but also how important it was to find a new normal.

Where were you in life when you received your diagnosis?
I was 35 at the time and had moved from south Mississippi to the Chicago area to teach at Wheaton College, where I started the Humanitarian Disaster Institute, the country’s first faith-based academic disaster research center. I had three young daughters, who are now 9, 12 and 15, so it was really hard to be a young dad with a young family and thinking, “How do we make it through this time of cancer?”

Did you share the news with your daughters?
That was one of the hardest conversations I ever had to have. My wife and I both felt that we needed to talk to them about it, because there was no hiding that I was sick. That summer I took oral chemotherapy twice a day and radiation five days a week, and then I had a major surgery to remove the tumor that had spread to a mass on my pelvis. After that I had to have six more months of drip chemotherapy. One of the things that was hard for me was to approach this in a way of being realistic yet balanced with optimism. We tried to take a developmental approach to understand what they understood about cancer and let them know what we knew so far. One of the other things that I feel was extremely important was giving space to our children after telling them this news (so they could figure out their) questions. For instance, one of my daughters asked, “Is cancer contagious?” I can’t imagine, if we hadn’t created that space, what that would have meant for the next year — she might have thought it was contagious to someone in the family — and how additionally stressful that would have been.

What kind of side effects did you experience?
A major challenge for me was that a lot of my identity had always been as the helper (and suddenly) I was the helpee — the person who needed the help. I had bad chemo brain during that time, and I was ill from the chemotherapy and had trouble keeping food down. At times my energy was low. After my surgery, I was bedridden for a month and needed someone to help me use the restroom because I was so weak. Even after I finished my treatments, it took me eight months before I got back to a more normal way in terms of my thinking and physicality. 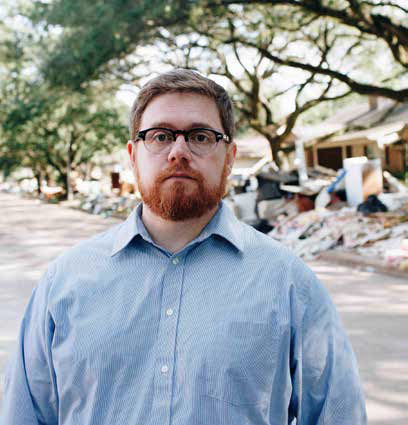 JAMIE ATEN, Ph.D., says it was difficult for him to become the “helpee” because he was used to being the “helper.”

Did your professional experience prepare you for cancer?
I remember early on, my oncologist was delivering the news, and he asked, “What do you do?” And I said that I direct this disaster institute, and he paused for a moment, and he said, “You’re in for your own personal disaster.” That was useful, because with disasters, I know that there tends to be stages that you go through. There are things that you can plan but also know that those plans are rapidly changing, and it’s the people around you who are more important than the plan that you have in place. I was able to apply some of those ideas to my own life, and I even learned things from other disaster survivors that I was able to use to help myself cope — for example, learning to let some of the pain wash over me versus fighting it. Another example: I had a lot of people who were incredibly wonderful helpers, but I also had some people, even though their heart was in the right place, say things that were quite hurtful. … I had worked in enough disaster zones with enough people to know that often people’s motivations are good, but they don’t know what to say because they are anxious and nervous, and then they end up putting their foot in their mouth. Because I had experience in that, it made it easier to be able to forgive them and move on without letting it weigh me down further.

How do you feel about the term “survivor?”
I like the word “survivor” because one of things that I hadn’t realized was that there is a difference between surviving and survivorship. With a mass disaster, it was (obvious that I was) helping people survive these catastrophic events, whereas I didn’t realize until a year or two out from my last treatment that I was struggling with some things, such as survivor’s guilt. I had lost three people close to me to a similar type of cancer, and I still have heath issues. I had to come to terms with having a colostomy. When I first had that colostomy, it made me feel like psychologically, cancer had already won, but now I have been able to come to see that this colostomy is one of the things that helped save my life. But that wasn’t automatic.

A few years ago, I had the opportunity to be the keynote speaker at Fred Hutchinson Cancer Research Center’s Survivorship Conference. Being there helped me see the differences about surviving. For instance, I learned that it can take a while to recover, and (recovering) doesn’t cancel out the pain or suffering that you have been through.

Do you have any advice for other survivors?
Don’t go through this alone. Often when we are hurting and find out news, such as a cancer diagnosis, a lot of (us) tend to isolate or withdraw from others, but I have found that when we are hurting is when we need people the most. Rather than letting this pain and these wounds serve as walls that keep others at arm’s distance, we instead need to use them as doors that let others into our lives to experience us in a more true and authentic way. That social support is very key to coping with such a traumatic experience.

Do you follow any daily rituals?
As a psychologist, I’ve always been aware of burnout and stress and the impact it has on us. But going through cancer has taught me to focus more on finding a good rhythm or just pure balance. I think it’s OK to have a time when we are busy. I like to think of it more like surfing. It’s OK to ride the wave and be busy, but we need to know and recognize when we need to come down from the wave and maybe even get off the board for a period of time. 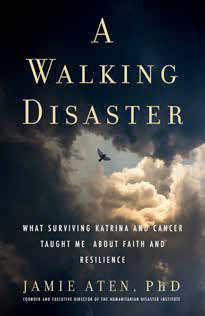 A Walking Disaster: What Surviving Katrina and Cancer Taught Me about Faith and Resilience can be purchased online, including at Templeton Press (templetonpress.org) and Jamie Aten’s website (jamieaten.com).
Be the first to discuss this article on CURE's forum. >>
Talk about this article with other patients, caregivers, and advocates in the Colorectal Cancer CURE discussion group.