Hope In the Midst of Cancer Sadness

Even after the longest storm, there are moments of hope and rest.
BY Susan F.
PUBLISHED July 21, 2016
Susan F was unwillingly thrust into the world of metastatic breast cancer after a routine mammogram in 2012. She uses her powers of persuasion, knowledge and writing for good in hopes of helping others similarly affected. She is a patient advocate, volunteering with METAvivor (metavivor.org), a volunteer organization raising funds for research in metastatic breast cancer. 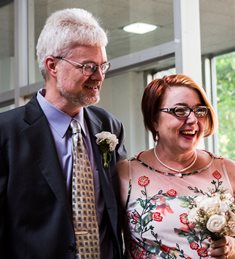 I got married this weekend. It was a sweet ceremony, in a small church, the guests gathered at tables surrounding the ceremony space. My husband's best friend said a few words during the ceremony, describing the growth of our love. It was a heartfelt speech, but I didn't realize until after the wedding, that he only knew my husband, not me. So he couldn't tell the story of how I came to love Jeff or my feelings about the day.

My diagnosis with cancer came in the middle of an already long streak of sadness. Three years prior to being diagnosed, my mother suffered a hemorrhagic stroke. The stroke left her brain destroyed, but luckily her advance directive was clear. As per her wishes, we took on the task of helping her die. This is something I never want to do again, but if someone I loved we're in a similar circumstance, I would help again. It was a painful, loving thing to do. My mother and I were very close, so after she died, I was left with the job of grieving her loss.

But apparently I was not done with loss. My older sister, like my mother, suffered from binge eating disorder, putting her at an incredibly unhealthy weight, which she worked hard to deny so that she could continue to partake in her food addiction. Six months after my mother’s death, my sister almost died due to that addiction. We all hoped that this close call would be the bottom she so desperately needed to hit in order to begin facing her addiction and make a start towards recovery. But that was not the path Melissa chose. She continued to binge eat, and in February 2010 Melissa passed away at age 51, leaving me to grieve yet another significant loss. And then, in January 2012, my own health became a serious issue, doctors discovering that metastatic breast cancer had covered my entire liver. I entered a grueling period of chemotherapy and surgery, along with constant, numbing fear of suffering, pain and death. The sadness continued.

In spite of all this sadness though, I decided to take a risk. Three years into my diagnosis I began to date. Because of the cancer, I did not know how long I would be alive. I only knew that I was stable for now, and I wanted to continue living. And living included dating. I entered dating only hoping to find a companion, someone with whom to pass an occasional evening. I did not expect to love the man sitting across from me. After Jeff and I began seeing each other, friends told me I looked happy. In dating, I took life day by day, partaking in what was in front of me, and I enjoyed my time with Jeff. I certainly hoped that Jeff would stay, but I had no expectations. I was, after all, someone with metastatic cancer. There were no guarantees in my future except a likely too-soon death. So when Jeff asked me to marry him, it was an unexpected joy. After so many years of unrelenting grief, it was a relief to finally receive some good news.

So what I felt on my wedding day was a sense of celebration of good news amidst the bad, a safe place in the middle of the storm. And this is what the best man did not know me well enough to say. For me, my wedding day was a day of sunshine in the darkness, a reprieve of the howling winds of grief. This day was a day unlike all others. It was a day of unmitigated joy. Now, looking back, I wish I had had the courage to ask someone to speak this truth for me, but I did not. So the only thing I can do is write my own wedding words, speak my own joy and tell my own story of unexpected love in spite of sadness of loss. Because, on that day, my wedding day, these words of renewed hope and returned growth after a scorching forest fire were the most important words of all.
Be the first to discuss this article on CURE's forum. >>
Talk about this article with other patients, caregivers, and advocates in the Breast Cancer CURE discussion group.