Behind the Scenes: Quietly Making Oncology Patients' Hopes a Reality 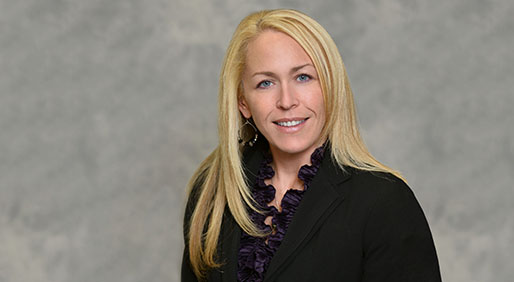 Lynnetta Hart, BS, M.Ed, CCRC PHOTO COURTESY OF JOANIE MANZO
Patients with cancer need cheerleaders. Cheerleaders who will fight beside them or for them when they are no longer able to do so on their own. Often, these people are readily identified as hands-on caregivers that include family, nurses, doctors and other providers. But behind these frontline forces are an army of less visible, but distinctly invaluable, individuals who selflessly provide the infrastructure that assures that patients have access to the highest-quality cancer care.

Lynnetta Hart is one such “cheerleader” and the embodiment of an Extraordinary Healer. Lynnetta actually is a bona fide cheerleader and knows how to teach others to cheer. From 1998 to 2003, she founded and ran a highly successful Cheer Gym. But lest you think that this skill set alone could qualify her to run one of the largest community research groups in the nation, you need to know a bit more about Lynnetta. She is a highly qualified leader who has earned a B.A. in human development, M.A. in education and a second M.A. in leadership management. Moreover, Lynnetta has put these achievements to work on behalf of all of our patients with cancer.

She joined Oncology Hematology Care (OHC) as a research data manager in 2009, and she rapidly advanced within our organization. In October 2013, she was promoted to Director of Clinical Research. Under her leadership, OHC has grown in its reach and prominence within the cancer research community. Our staff grew from 11 full-time employees to its current level of 31 dedicated research staff with over 60 active cancer clinical trials and many more in development.

Since Lynnetta assumed her leadership position, OHC has been able to add phase 1, nextgeneration sequencing/personalized medicine, BMT, and immuno-oncology trials to its clinical trial menu. Hundreds of patients have been able to access these and other cutting-edge therapies as a result of Lynnetta’s initiative, passion and drive. When National Public Radio recently profiled advances in oncology care, highlighting some of the newer immune therapies, we all took great pride in knowing that a significant number of these pioneering patients hailed from the tristate area. In recognition of these efforts, OHC received its second Clinical Trials Participation Award from the American Society of Clinical Oncology — one of only five oncology groups in the nation to ever repeat.

Like a great leader, Lynnetta has resisted taking credit for such achievements. Rather, she has a wonderful ability to connect with all of our staff, helping them to understand their relative contributions to these collective achievements and inspiring them to reach even higher. She makes each research patient’s contribution and story even more meaningful.

Every day, patients come to our clinics to receive not only their chemotherapy, but also hope. Hope can take many shapes and forms, and often hope lies with the opportunity to access cutting- edge therapies. These patients usually aren’t aware that there are individuals like Lynnetta who are working behind the scenes to make their hope a reality.

For example, recently there was a male patient suffering from advanced bladder cancer who was identified as having an unusual genetic alteration seen most often in women with breast cancer. But there was hope in being able to access a clinical trial targeting this alteration outside of the usual breast cancer setting. Unfortunately, this trial was not open at OHC. With grit and perseverance, Lynnetta rapidly aided her staff in making this treatment a reality. Three months later, this patient with bladder cancer was responding to a treatment most often reserved only for women with breast cancer. Instead of just hope, he was given the reality of added quality time with his family. Many such stories are quietly being told and celebrated daily.

If leadership is about making others better as a result of their presence, and making sure that their impact will last in their absence, then Lynnetta Hart is a genuine leader. Her efforts will have a lasting impact on many patients with cancer (who will never know her name or connect their successes with her efforts) and on research here in our community.
Be the first to discuss this article on CURE's forum. >>
Talk about this article with other patients, caregivers, and advocates in the General Discussions CURE discussion group.