More Than Just a Cancer Nurse: Mel's Angel on Earth 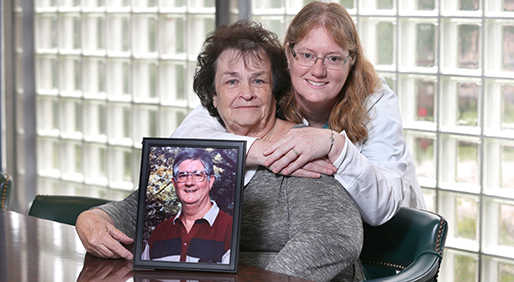 Aggie Higginbotham and Nicole Guttierrez, RN, CCRC PHOTO BY SUSAN POAG
In early May 2015, we met Nicole Guttierrez, nurse/clinical trial research coordinator at East Jefferson Cancer Center. This was after several failed trips for clinical trials to Houston, Texas, only to be told that the clinical trial had closed the day before arriving. My husband Mel was diagnosed with invasive bladder cancer in October 2013. He underwent complete bladder removal in March 2014 and started his chemo and radiation therapy immediately after surgery. Until February 2015, the chemo was keeping the cancer under control, but then it started to spread to his lungs. Our local oncologist suggested clinical trials, so we began looking for a clinical trial in Houston. We made two trips, and each time the trial had closed. When we returned to Baton Rouge, my husband had given up any hope of getting into a clinical trial.

In came Nicole, my husband’s “Angel on Earth.” I had found another clinical trial for his bladder cancer on the hospital website. Nicole was contacted the next day about the trial, and from that point on, she became a part of our daily lives as a nurse and personal friend.

When Nicole first meets a new patient, she gets to know you and helps you understand the treatment for your cancer. She knows that education and communication are key to the success of your treatment. During the short seven months that my husband knew Nicole, she gave him words of encouragement, made hundreds of phone calls and sent countless faxes and emails. She is very professional and extremely knowledgeable, with excellent nursing skills. She is always available for your calls, whether it is day or night, seven days a week. Always a kind, compassionate voice when she answers her phone or returns your call to assist you.

The treatment that Mel was taking had several side effects, one of them being severe constipation. Early one afternoon in August 2015, he started having problems with pain and contacted his local doctors, who told him to take some medication, which worsened the situation. By 7 p.m. that evening, he was in so much pain that he told me to call Nicole because “she will take care of me.” I placed the call to Nicole and was instructed to bring him to the hospital in Metairie, about an hour-anda- half drive from our home. When we arrived, we were sent through the emergency room, then to the oncology floor, within an hour after arriving. Nicole had contacted everyone involved in his treatment. She kept in contact with us during the night, and early the next morning on her day off, she came through the door to make sure he was started on his recovery. We spent three days in the hospital, and she was always there for us.

My husband actually enjoyed going for his treatments every two weeks to see “his Nicole.” She always put him a good mood, discussing his vegetable garden and deer hunting trips, which eased his pain from the anxiety of his visit with the doctor. She went to chemo treatments with him to make sure that he was comfortable and that the medicine was correct, and would follow up during and after each treatment. Then she would call the next day to check on him.

In October 2015, Mel’s bladder cancer was responding to treatment, but then here comes the severe constipation again. My husband was unable to make the trip to Metairie for treatment, and so he entered our local hospital on October 13th. Nicole was notified immediately. The pain was horrible, but he kept saying that "his Nicole" would know how to stop the pain if he could make it to Metairie. He went into intensive care on the following Monday morning and left us on Tuesday at 2:49 a.m. He never was able to speak with his Nicole again, but he is smiling down on her for all of the good times and care that she gave him. She will always be his “Angel on Earth” and my best friend.
Be the first to discuss this article on CURE's forum. >>
Talk about this article with other patients, caregivers, and advocates in the General Discussions CURE discussion group.