The two treatments were used sequentially in the open-label, phase 1 ALPHA study that occurred across six U.S. sites, demonstrating an overall response rate of 63%, including a 37% complete response rate, in 19 evaluable, previously treated adults.

Researchers believe that allogeneic CAR-T therapy, made from healthy donor T cells, can provide the benefits of autologous CAR-T therapy while increasing patient access, the study’s lead author Dr. Sattva S. Neelapu, of The University of Texas MD Anderson Cancer Center in Houston, said during a presentation of the data. He said that providing an “off-the-shelf” version of CAR-T cell therapy makes it available to patients more quickly, including on occasions when repeat dosing is necessary.

ALL0-501 is a genetically modified anti-CD19 CAR-T cell product in which the protein TCR alpha is disrupted to reduce the risk of graft-versus-host disease (GvHD). To support the effectiveness of the two-pronged approach, the protein CD52 was not in ALLO-501 so that its partner therapy, the anti-CD52 monoclonal antibody ALLO-647, can be used successfully in lymphodepletion treatment. 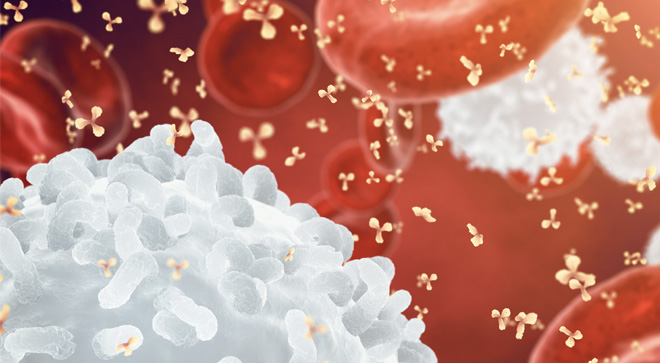 Eligible participants had advanced disease, as well as an ECOG status —the measurement for clinicians to assess quality of life in patients — of 0 or 1 and had been treated with at least two previous lines of therapy.

A total of 22 patients, whose median age was 63 years, were treated. Approximately two-thirds had diffuse large B-cell lymphoma and the rest had follicular lymphoma. Approximately half had high-risk disease. Their median number of previous treatments was four.

Patients underwent lymphodepletion that included fludarabine, cyclophosphamide and ALLO-647; three regimens of varying doses were tested, which included ALLO-647 doses of 39 milligrams (mg) and 90 mg. This was followed by infusion of ALLO-501 at CAR-T cell doses of 40 million, 120 million or 360 million, Neelapu said.

All the medication in the trial was made from the T cells of a single healthy donor, he said.

At a median follow-up of 3.8 months, 63% of patients demonstrated a response to treatment, including 37% who had complete responses. Most patients experienced tumor shrinkage, Neelapu said. The median time until response was 1 month, and nine patients continue to respond to treatment. One patient achieved a complete response after a second infusion of ALLO-501, Neelapu reported.

He noted that 10 of 16 patients evaluated to date showed evidence of CAR-T cell expansion, which was associated with better response.

No dose-limiting toxicity or GvHD was observed in any of the patients treated. The most common side effects considered grade 3 or higher were neutropenia, leukopenia (a low white blood cell count) and anemia. Seven patients developed cytokine release syndrome, two of them at grade 1, four at grade 2 and one at grade 3, all of which were reversible without steroids or tocilizumab (Actemra), according to the researchers. About half the patients had infusion reactions, which were not considered as severe. Eleven infections reported were grade 3 and lower, mostly asymptomatic and diagnosed during weekly monitoring, Neelapu said. Finally, one patient developed a grade 1 neurotoxicity that was resolved without treatment.

Neelapu said the safety of the two drugs appears comparable to that of autologous CAR-T products currently approved for use.

Follow-up is ongoing as researchers seek to enroll more patients to test for further response.

A version of this article originally appeared in OncLive® as “Off-the-Shelf CAR-T Cell Therapy Demonstrates a High Response Rate and Manageable Safety Profile in Relapsed/Refractory B-Cell Lymphomas”.
Be the first to discuss this article on CURE's forum. >>
Talk about this article with other patients, caregivers, and advocates in the Lymphoma Cancer CURE discussion group.