Alecensa (alectinib) was granted approval by the Food and Drug Administration (FDA) to treat patients with ALK-positive metastatic non–small cell lung cancer (NSCLC), according to Genentech (Roche), the manufacturer of the second-generation ALK inhibitor.

Alecensa (alectinib) was granted approval by the Food and Drug Administration (FDA) to treat patients with ALK-positive metastatic non—small cell lung cancer (NSCLC), according to Genentech (Roche), the manufacturer of the second-generation ALK inhibitor.

The frontline approval is primarily based on findings from the phase 3 ALEX study. Compared with Xalkori (crizotinib), Alecensa improved progression-free survival (PFS) by 47 percent in the trial, as assessed by an independent review panel.

In addition to granting this new indication, the FDA has also converted Alecensa’s accelerated approval for patients with ALK-positive NSCLC who have progressed on Xalkori to a full approval.

“Our goal is to develop medicines that have the potential to significantly improve upon the standard of care,” Sandra Horning, M.D., chief medical officer and head of Global Product Development, Genentech, said in a statement. “In our pivotal study, Alecensa significantly extended the time that people lived without their disease worsening compared to crizotinib and also showed a marked reduction in the risk of their cancer spreading to the brain.”

In the ALEX trial, researchers at 161 locations in 31 countries randomly assigned treatment-naïve patients to twice daily dosages of 600 mg of Alecensa (152 patients) or 250 mg of Xalkori (151 patients). Investigator-reported median PFS, the study’s primary endpoint, was 11.1 months with Xalkori and had not been reached in the Alecensa arm. Median PFS, as determined by an independent review committee, was 25.7 months in the Alecensa arm versus 10.4 months in the Xalkori arm.

Alecensa reduced the risk for progression in the CNS by 84 percent compared with Xalkori. The 12-month cumulative rate of CNS progression for people with or without existing CNS metastases at baseline was 9.4 percent in the Alecensa arm and 41.4 percent for Xalkori.

Alecensa was associated with fewer serious adverse events (AEs). In ALEX, 41 percent of patients assigned to Alecensa experienced grade 3 or higher AEs compared with 50 percent in the Xalkori group. Additionally, AEs leading to discontinuation (11 percent vs 13 percent), dose reduction (16 percent vs 21 percent), and dose interruption (19 percent vs 25 percent) were all lower with Alecensa. 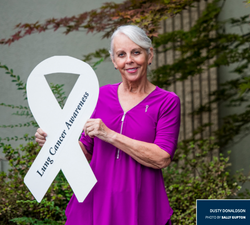