Multiple myeloma is the second most prevalent blood cancer (10%) after non-Hodgkin lymphoma and represents approximately 1.4% of all newly diagnosed cancers. In 2011, an estimated 83,367 people were living with myeloma in the United States. An estimated 24,050 new cases (13,500 in men and 10,550 in women) were reported in 2014 in the United States, according to Surveillance, Epidemiology, and End Results data. Using statistical models for analysis, rates for new myeloma cases have been rising, on average, 0.7% each year from 2002—2011. Death rates have been falling an average of 1.7% each year from 2001–2010. However, this death rate still remains significant as the vast majority of patients with myeloma will ultimately become refractory to standard treatment and lose their battle with the disease.

Large-scale genomic studies of multiple myeloma have shown that almost one-half of relapsed patients have genetic alterations that could be targeted by anticancer agents currently in clinical development. As cancer medicine continues to evolve into a more molecularly based discipline with many new treatments being developed that are aimed at specific cancer-related pathways and genetic alterations, new clinical trial designs and approaches are needed to evaluate the promise of these potential therapies.

Among the MMRF’s current professional education offerings is a multiple myeloma update from the 2014 American Society of Hematology (ASH) Annual Meeting. This free, online, continuing education activity has been accredited for physicians and nurses involved in the care of patients with multiple myeloma.

For more information and to participate in this CE activity, click . 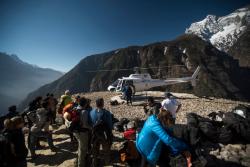 How a Hike on Mount Everest to Raise Awareness, Funds for Blood Cancer Forever Changed the Lives of the Participants

Program Leads Patients With Cancer on ‘The Right Track’
Advertisement