A type of CAR-T cell therapy is showing promise in a phase 1 study for patients with Hodgkin lymphoma and ALCL.
BY Jason Harris
PUBLISHED August 18, 2017 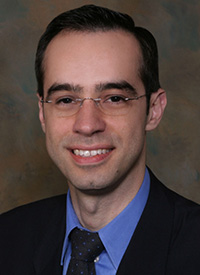 Carlos A. Ramos, MD
Researcher found that CD30-specific chimeric antigen receptor (CAR) T cells are a safe and durable treatment option to induce durable complete repsonses in patients who have Hodgkin lymphoma and anaplastic large cell lymphoma (ALCL), according to an early-phase study published in the Journal of Clinical Investigation.

Among the seven patients with relapsed Hodgkin lymphoma, there was one complete response (CR) that lasted more than 2.5 years after the second infusion of CD30.CAR-Ts, one continued CR that lasted for almost two years, and three patients with stable disease. Of the two patients who did not respond, one was alive with disease and one died of disease.

Of the two patients with ALCL, one had a CR that lasted nine months following the fourth infusion of CD30.CAR-Ts and one patient did not respond but was still alive with disease.

“We have now used this CAR in a phase I dose escalation study in patients with relapsed/refractory CD30+ Hodgkin lymphoma and ALCL malignancies and show, for the first time to our knowledge, the induction of complete response in relapsed/refractory patients with Hodgkin lymphoma or ALCL, even in the absence of conditioning and without significant toxicities,” first author Carlos A. Ramos, M.D., Center for Cell and Gene Therapy, Baylor College of Medicine, and coinvestigators wrote.

Researchers infused CD30.CAR-Ts to each patient as a single administration over two to five minutes. Molecular signals (genomic quantitative PCR for CD30.CAR-Ts were detected in the peripheral blood of all patients by three hours after infusion. These signals peaked within the one week after infusion in proportion to dose level, with the highest detection at the third dose level.

Molecular signals declined over time, but remained detectable for more than six months after infusion in six patients.

Seven patients received a second infusion of CD30.CAR-Ts. One patient received a total of four infusions, which produced only modest expansion of CD30.CAR-Ts in the peripheral blood. Molecular signals were below the threshold needed to detect distinct CAR-Ts by flow cytometry in patients treated at the first and second dose levels, but CD30.CAR-Ts were consistently detectable in the peripheral blood in patients in the dose level 3 group.

Researchers said CD30.CAR-T infusions were well tolerated at all dose levels, and after one or more infusions. None of the most frequently reported adverse events (AEs) — fatigue, hyperkalemia, hypokalemia or transient elevation of aspartate aminotransferase — was considered related to CD30.CAR-T infusion.

After infusion, there were no significant differences observed in white blood cell counts except for a modest reduction in eosinophils, and B and T cell counts remained stable.

No patients developed symptoms consistent with cytokine release syndrome. Researchers noted elevations of inflammatory cytokines, such as IL-6 and TNF-α, which generally coincided with the peak of CD30.CAR-T expansion, but found that the fold increases from baseline were modest. Similarly, they did not observe significant changes in levels of IL-15, IL-7 or IL-2.

Because CD30 is expressed on activated T cells, researchers monitored T cell immunity to viral antigens in all patients before and after infusion of CD30.CAR-Ts. CD30.CAR-Ts did not impair the frequency of T cells reactive to common viral pathogens such as EBV, CMV, adenovirus, or influenza. No patients developed viral infections after receiving CD30.CAR-Ts.

Overall, 33 percent of infused CD30.CAR-Ts expressed PD-1, but researchers observed no correlation between PD-1 expression and CD30.CAR-T expansion or persistence in vivo.

“Our study demonstrates the tolerability, safety, and potential efficacy of CD30.CAR-Ts in CD30+ lymphoid malignancies,” Ramos et al wrote. “Appropriate tumor reduction and lymphodepletion before CD30.CAR-T infusion should enhance their clinical activity without increasing toxicity. Future exploration of the synergy between CD30.CAR-Ts and PD-1/PD-L1 blockade may also prove beneficial.”
Be the first to discuss this article on CURE's forum. >>
Talk about this article with other patients, caregivers, and advocates in the Lymphoma Cancer CURE discussion group.