A Bit of Bad News

Millions of people worldwide hear these words every year.
BY Khevin Barnes
PUBLISHED December 09, 2015
Khevin Barnes is a Male Breast Cancer survivor, magician and speaker. He is currently writing, composing and producing a comedy stage musical about Male Breast Cancer Awareness. He travels wherever he is invited to speak to (and do a little magic for) men and women about breast cancer. www.BreastCancerSpeaker.com www.MaleBreastCancerSurvivor.com 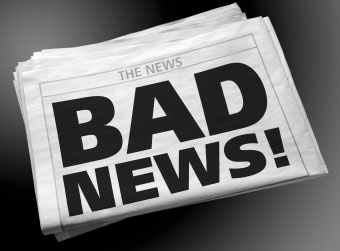 My breast cancer diagnosis came about in a rather typical fashion. After my mammogram, needle biopsy and ultra sound (all of which happened within a week of my primary care physician examining the small bump under my left breast), I awaited the news that could potentially alter the course of my life.

It seems that many of us who are busy surviving cancer are ill-prepared for the sudden realization that our lives are about to change quite dramatically. I certainly wasn't ready to hear the message that had been left on my cell phone one Sunday in May 2014.

It was Mother's Day and as fate would have it, I had left Hawaii where I was a resident for a year in a Zen Buddhist monastery and flown back on short notice to Newport Beach, California, to spend some final hours with my mom. She was in hospice, waiting to die at the age of 93.

My few days there were spent holding her hand, talking with my brother and two sisters and waiting for the moment when my mom could take her final, sweet breath and be carried away. The day before I flew to the mainland, my doctor had taken the biopsy of the suspicious tiny lump in my left breast, promising to call me with any news.

After sitting with Mom for awhile on Mother's Day, I left my post so that my older sister could take over. I saw a message on my cell phone, dialed it up and heard my doctor's voice that began:

Her message was brief and to the point and I can still replay it my mind, so many months later. There were a few quiet words, an apology with a hint of disappointment, and suddenly the world as I knew it was a very different place.

There are few moments so shocking in our lives that we can recall the exact time, place and circumstances of the event. The assassination of President John F. Kennedy is one of those for me. I was in my seventh grade journalism class when the news came over the scratchy public address system. Neil Armstrong landing on the moon was another one. The death of Walt Disney, my longtime hero, was still another. And then there was that poignant and life changing phone message:

In Zen meditation there is a moment of "Kensho," a sudden realization or insight that works hand in hand with enlightenment that, once perceived, can never be forgotten or taken away. These brief and powerful awakenings which are thrust upon us with great clarity and awareness are akin to the news of our cancer. Once heard, the world can never go back to the way it was just ten seconds earlier.

I do not assume that because at this very moment I have cancer, I will also have it in a week, or a year. There is an unexplainable sort of strength that comes with not knowing precisely where a newly discovered truth will take us. It’s frightening, too, especially when the news is fresh. If we allow the simple realization that “this is what is, right now” to vent itself, release its steam and become nothing more than the vapor upon which it blew into our lives — our “bit of bad news” becomes nothing more than a thought or a phone message in a world with much bigger stories waiting to find us.
Be the first to discuss this article on CURE's forum. >>
Talk about this article with other patients, caregivers, and advocates in the Breast Cancer CURE discussion group.