How Cancer Cured My Fear of Doctors

Claustrophobic, needle-phobic and just plain wimpy, the fight to survive has pulled me through.
BY Khevin Barnes
PUBLISHED September 27, 2017
Khevin Barnes is a Male Breast Cancer survivor, magician and speaker. He is currently writing, composing and producing a comedy stage musical about Male Breast Cancer Awareness. He travels wherever he is invited to speak to (and do a little magic for) men and women about breast cancer. www.BreastCancerSpeaker.com www.MaleBreastCancerSurvivor.com 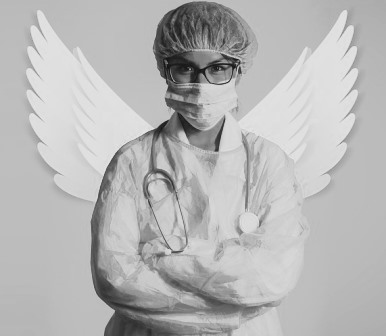 I’ll be the first to admit that I have some neurotic tendencies when it comes to medical procedures.

I can trace this back to my fifth birthday when I was running barefoot on the sidewalk and stepped on a large piece of glass, probably from a broken bottle, that lodged itself deeply into the heel of my right foot.

I remember my father walking into the house where I had been taken. I was nearly incapacitated from my fear. He had a large hat pin in his hand. He explained that he needed to probe the wound to be certain there was no glass remaining under the thick skin of my heel.

I didn’t know a whole lot as a 5-year-old, but I was quite certain that nobody was going to jam a needle into my already bleeding foot. As I recall, I screamed until they left me alone. The wound healed and life continued. The only problem was that the jagged and certainly unclean piece of glass was still embedded inside my heel. I was limping, unable to put any weight on that foot and much too scared to let anyone near it.

A few weeks passed until one day my mother picked me up at school and said we were “taking a trip.” I knew something sinister was headed my way, and sure enough, we ended up at the hospital in Los Angeles where I was finally told that surgery would be performed to remove the glass and the infection that festered in my foot.

I was later told that it took three large nurses to hold me down to administer the anesthesia. I was certain that they were going to kill me, and I was fighting for my life.

So that’s the family story that sometimes pops up over the Christmas meal, the tale of how little Khevin fought like a crazed gladiator, kicking and screaming until he was subdued by several large people and a hefty dose of sodium pentothal.

I managed to keep my distance from the medical community for the next 50 years. And then, shortly before my 64th birthday, I was diagnosed with male breast cancer.

Having cancer is a traumatic experience for sure but I was fairly certain that the bloodwork, needle biopsies and lying face down in an MRI tube for 25 minutes at a stretch was either going to kill me or cure me, or perhaps disable my overactive panic button.

As I see things today, one of the best parts of the medical tests I undergo is that they are designed to keep me alive. I like that. And I haven’t met a technician yet that doesn’t answer all of my questions and laugh a little with me. I’m also aware that there are many, many more cancer survivors who endure multiple procedures that are far more challenging than mine. This too has helped me to put my fear in perspective.

I no longer just see a “white coat” walking toward me as my pulse races and my brain turns to fuzz. I see my doctor in that coat. It’s the same person that has two great kids at home and likes to ride bicycles on the weekend and listen to good jazz music. And she’s definitely there to help.

So, to all those in the medical profession who work so diligently for our survival I say “thank you.” Thanks for letting me talk and ask more questions than I need to. Thanks for letting me squirm in the chair as you take my blood. Thanks for laughing at my corny jokes. And most of all, thank you for choosing a line of work that is dedicated to helping people like me live longer and better lives.