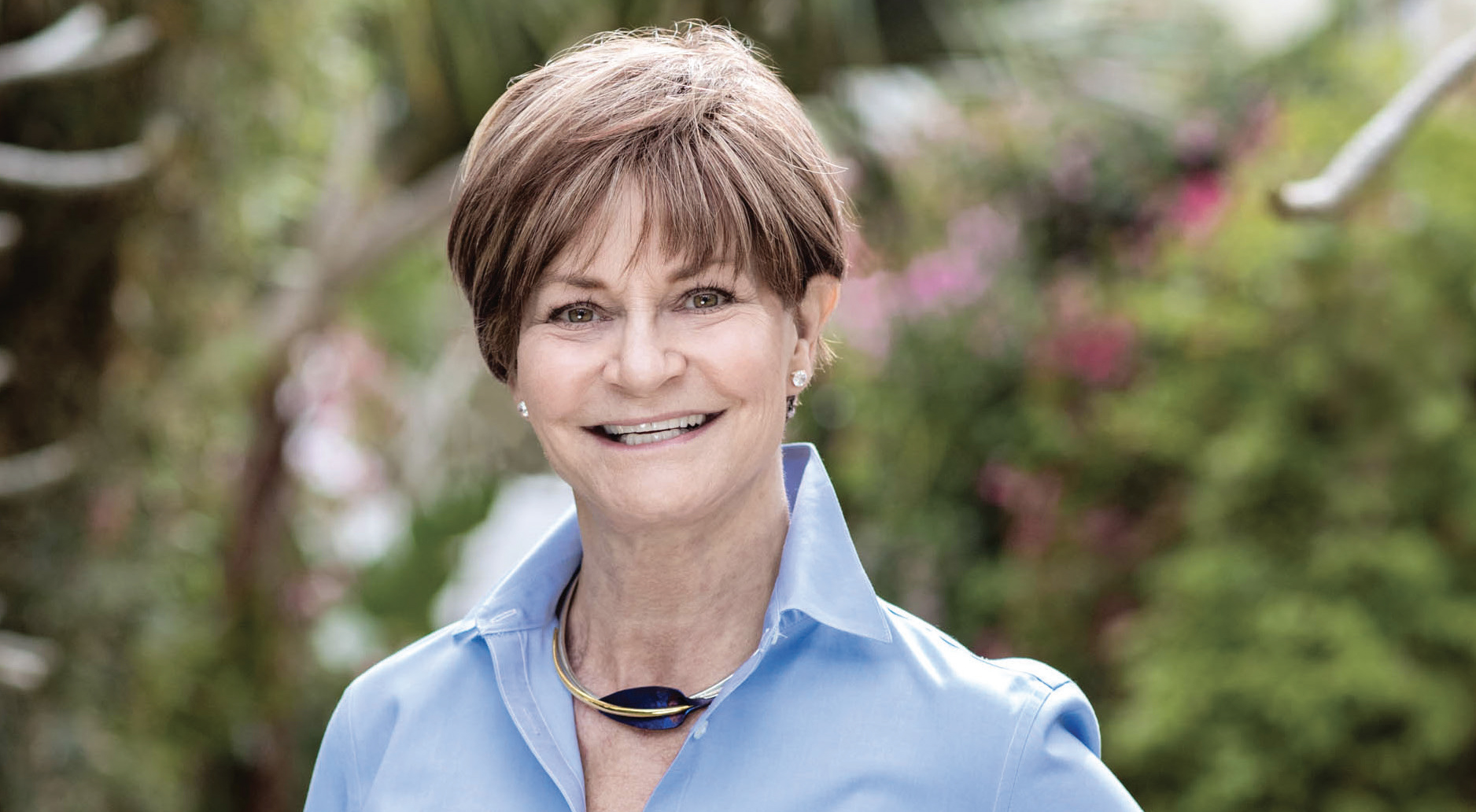 ELAINE KOZIARJORDAN, 62, recieves an experimental drug through a clinical trial that she will participate in for two years. - PHOTO BY VALERIE BOGLE
When the lung cancer that Elaine Koziar-Jordan was successfully treated for in 2010 returned three years later, she initially responded well to chemotherapy. But then, in 2016, her cancer came back, and she learned it had spread to her brain and several lymph nodes near her lungs. Her doctors at H. Lee Moffitt Cancer Center in Tampa, Florida, determined that another course of chemotherapy wasn’t an option.

But Koziar-Jordan was fortunate because during the time she was fighting her cancer, scientists around the world were developing newer forms of immunotherapy — drugs that can train the immune system to recognize and eliminate tumors. And they were putting together clinical trials of innovative combination treatments designed to thwart the growth of lung tumors by attacking them from many different angles.

Koziar-Jordan was accepted into one of those trials in November 2017. Once a month she receives an infusion of a drug that blocks PD-1, a protein that normally allows cancer to hide from the immune system. Along with that treatment, she takes four capsules per day of an experimental drug called an adenosine A2a receptor antagonist. The drug is designed to inhibit a chemical produced by cancer cells that helps tumors to escape immune detection.

After Koziar-Jordan’s first few months on the experimental treatment, her scans already showed significant shrinkage of the cancer.

She had been struggling with a chronic cough and swallowing issues because of one tumor that was near her esophagus, but those symptoms subsided. “One day I woke up and I wasn’t coughing all day long,” says Koziar-Jordan, a 62-year-old retired human resources executive. “It was such a relief.” Koziar-Jordan’s brain metastases were successfully treated with radiation. She expects to stay in the drug trial for two years.

Immunotherapy is just one of several new choices that have revolutionized the treatment of advanced lung cancer over the past few years. In addition to drugs that inhibit immune “checkpoints” such as PD-1, tools for treating lung cancer now include targeted medicines that address genetic abnormalities found in tumors. As oncologists learn more about how to tailor treatments to the patients most likely to respond to them, and as combination approaches start to gain steam, it’s becoming more and more possible for many patients to keep lung cancer under control for many years or even be cured of the disease.

“When resistance to therapy develops, patients can move to other modalities like immunotherapy,” says Scott Antonia, M.D., Ph.D., chair of the Department of Thoracic Oncology at Moffitt. “We’re seeing an increasing number of people who are very long-term survivors.”

Because lung cancer rarely causes symptoms until it has reached an advanced stage, it’s common for the disease to have already spread by the time it’s diagnosed. About half of patients have metastatic cancer at the time of their initial diagnosis, estimates Howard (Jack) West, M.D., medical director of the Thoracic Oncology and Genitourinary Oncology Programs at Swedish Cancer Institute in Seattle.

The most common places for lung cancer to spread are to the adrenal glands, bone, brain and liver, according to the National Cancer Institute. “The first inkling of lung cancer is often symptoms related to the spread of the disease, such as shortness of breath and cough, or systemic symptoms like weakness and weight loss,” West says.


Patients diagnosed with advanced lung cancer will often start by being treated with chemotherapy and/or radiation. Patients who are in stage 3 of the disease — meaning their cancer is largely confined to the lungs and nearby lymph nodes — may be prescribed chemotherapy drugs, such as cisplatin or carboplatin, often alongside radiation, followed by immunotherapy. Surgery to remove lung tumors might also be recommended. Patients with stage 4, or metastatic lung cancer, are often prescribed chemotherapy as the first treatment. The initial treatment is usually 4 to 6 cycles.

One major advance over the past few years has been the introduction of lung cancer treatments that target specific tumor mutations or other aberrations, particularly the EGFR, ALK, ROS1 and BRAF 600E genes. They can be diagnosed with genetic tests of tumor samples — now a routine exercise in determining the best treatment strategy. “We can order tests for specific molecular drivers like EGFR, ALK and others, and expect to get results back within three to five days,” West says. “That allows us to make a decision about the best first-line treatment within a week of diagnosis.”

An estimated 10 percent of patients with NSCLC have EGFR mutations. Several drugs have been approved to target this abnormality, including Tarceva (erlotinib) and Iressa (gefitinib).

The increasing understanding of EGFR has given rise to drugs that target specific subsets of patients who have variations of the mutation that lessen their likelihood to respond to targeted treatments.

For example, Tagrisso (osimertinib) was approved by the Food and Drug Administration for the first-line treatment of patients with EGFR-sensitizing and EGFR T790M-resistance mutations, which increase the likelihood that patients will not respond to older treatments. In a pivotal clinical trial, patients taking the drug had a 54 percent lower risk of progression or death than did those taking standard therapies.

In January 2018, the drug Gilotrif (afatinib), which was initially approved in 2013 to treat some patients with metastatic NSCLC, gained an additional approval to treat patients with rare EGFR mutations known as L861Q, G719X and S768I. The objective response rate to the drug in a phase 3 trial was 66 percent, and more than half of patients continued to respond to the drug for more than a year.

“These mutations are rare, but we see them,” West says. “In the past, we didn’t have a clear sense of what to do for these patients. Now we have options that we didn’t have before, and treatments can make a big difference for them.”

About 3 percent of patients with NSCLC have what are known as gene rearrangements, which are not mutations but rather chromosome abnormalities. One such rearrangement, ALK, can be addressed with drugs including Alecensa (alectinib), Zykadia (ceritinib) and Xalkori (crizotinib). ROS1, another NSCLC rearrangement, is most common in people who have never smoked. Xalkori was approved to treat ROS1-positive metastatic NSCLC in 2016. Side effects of targeted treatments can be similar to those of chemotherapy, including nausea, fatigue and rash.

WAKING UP THE IMMUNE SYSTEM


Immunotherapy has become a popular option for patients who progress after receiving targeted drugs or older treatments. Two PD-1 inhibitors, Opdivo (nivolumab) and Keytruda (pembrolizumab), are approved for the treatment of NSCLC, as are the PD-L1 inhibitors, Tecentriq (atezolizumab) and Imfinzi (durvalumab). In a trial reported in 2017, 16 percent of patients taking Opdivo survived beyond five years with their disease — quadruple the survival rate typically seen with chemotherapy.

Side effects of immunotherapy drugs include fatigue, nausea and shortness of breath. In the trial of chemotherapy combined with Keytruda, some patients developed kidney injuries, but only 10 percent of patients experienced side effects that were severe enough to force them to stop the treatment.

There are multiple clinical trials underway combining different approaches to attacking lung cancer. For example, Opdivo is being tested along with another immunotherapy drug, Yervoy (ipilimumab), which targets the checkpoint receptor CTLA-4. In a recently released trial, the overall response rate to the combination was 25 percent, compared with 11 percent for Opdivo alone. In another trial, Keytruda is being combined with an EGFR inhibitor called Portrazza (necitumumab). That combination produced an overall response rate of 29.4 percent in an early trial.

Combinations may help patients with lung cancer who don’t respond to current therapies or become resistant to them. “Cancer is able to grow and spread in the body because it adapts in different ways to hide from the immune system,” says Rachel Sanborn, M.D., a medical oncologist at Providence Cancer Institute in Portland, Oregon. “The future is with combinations of immune therapies. I think we’ll see drastic strides over the next 10 years.”

Darcy White, one of Sanborn’s patients, is receiving Opdivo with high-dose radiation. White’s NSCLC was diagnosed in 2009 and was initially treated with surgery and chemotherapy, followed by a trial of Tarceva, an EGFR-targeted drug. But, in 2016, she was diagnosed with a new primary cancer. An intial treatment with chemotherapy didn’t clear the cancer, so she was given high-dose radiation in April 2017, followed by Opdivo every two weeks. White’s cancer has disappeared.

The drug causes a bit of fatigue and dry eyes and mouth, but those side effects “are nothing compared to chemo,” says White, 58, a health insurance executive who has gone back to work full time. She looks forward to discussing the possibility of going off all treatments with her doctors this year but feels fortunate to be responding well to an immunotherapy drug with relatively minor side effects. “The research advances, even just in the last two years, have been incredible,” she says. “I feel so lucky.”

Because the side effects of immune-boosting drugs are relatively benign compared with those of chemotherapy, it’s feasible for some patients to stay on them for many years to keep their lung cancer under control. And some recent studies are showing a long-term benefit with immunotherapy treatments. In February, data were released from a trial comparing Opdivo with the chemotherapy drug docetaxel in patients with advanced NSCLC. The three-year overall survival rate was 17 percent in patients taking Opdivo, compared with 8 percent in those who received docetaxel. The rate at which patients survived for three years without their disease progressing was 10 percent with Opdivo, compared with less than 1 percent for docetaxel, and the median duration of response to Opdivo was about two years — far outlasting the response to docetaxel, which was under six months. “This shows that a substantial number of patients achieve very sustainable, long-term responses,” says Everett Vokes, M.D., chief of the Department of Medicine at the University of Chicago and the lead author of the study. “Of the patients who benefited on (Opdivo), it was impressive how long the benefit lasted.”
Be the first to discuss this article on CURE's forum. >>
Talk about this article with other patients, caregivers, and advocates in the Lung Cancer CURE discussion group.